before we arrived in japan i should have known we wouldn’t make it a week before needing to go to medical.

with the 2 little circus members fussy, running fevers, pulling at their ears & with runny noses i called medical to make an appointment.

so much for the lollipops & drinks we gave them during take off & landing. honestly, those lollipops were a sanity saver for the potentially disgruntled passengers seated near us.

it is possible to get a same day sick appointment but to better your chances call at 0730 when they open.

i was relieved to get them both appointments but bummed when i was told they were with different doctors. any mother understands my frustration. while i try my hardest to be super mom i can’t split my body in two.

so i accepted both appointments & naturally did the first thing that any rational wife would do, call her husband on his cell till he answers.

my husband was at work since he’d finished his check in & wasn’t pleased when i told him that he needed to meet me at medical for the kids appointments.

“you can’t take them yourself?”

hmm, how am i going to answer that ridiculous question when i’d just told him about the time scheduling.

naturally he arrived AFTER vitals were started but came around the curtain at the critical moment when our son was crying as if he was being murdered while the corpsman “attempted” to get his pulse ox. why he insisted on taking it from his finger instead of his foot was beyond me. next time he’ll know better.

the situation increased to “daddy’s pissed level 3” when he & our son were escorted to an exam room but i wasn’t as our doctor was running late.

“what in the heck am i here for? their appointments aren’t at the same time!”

i smiled & opened ant smasher on my iPhone to entertain the kids.

men just don’t get it at times! please tell me yours the same way. i’m not the only one am i?

5 minutes after smashing ants & being forced to the waiting area i was informed that our room with “dr. late” was now available.

after a lack of pediatric ear loops to remove wax but enlarged lymph nodes “late dr” and i agreed to start antibiotics for an ear infection. this seemed like the best plan of action since a text from angry daddy read, “ear infection. pharmacy.”

i seriously love those text messages. would it kill him to write in a complete sentence!??! 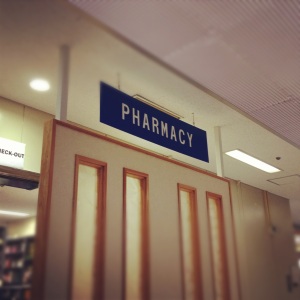 the wait at the pharmacy was the equivalent of 1 tom & jerry episode.

i kissed my now happy that-his-wife-booked-doctors-appointments-since-the-kids- have-ear-infections husband goodbye & he went back to work.